It's been a long time since I posted and I doubt anyone ever visits here anymore and that's just fine.  I need to vent about something, but I can't really vent to any people.  So - here goes.  Hubby's firehouse celebrated their centennial yesterday - a big deal.  When they first started talking about the celebration a couple of years ago, it was going to be a dinner, wives included.  Then they determined they couldn't afford to do it up like that, so they switched to a luncheon with only past and present members invited.  I was fine with that.  Until today, when I found out that non-members were indeed allowed.  They had to fork over $200 - but they were allowed.  And wives were not.  Bastards.  I wonder if they even gave any thought to us during the day.  Hell, we were even discouraged from attending the public ceremonies.  And then I see a friend post his pictures on facebook.  He was there.  I get the feeling that our husbands do not fully appreciate our role in the firehouse family - that this celebration should have included us before it included any outsiders - any hangers-on.  We are the ones who worry when they are at work, when we hear about an incident that we know they are at - when a building explodes or a window washer is stuck 70 floors up in the Freedom Tower.  We are the ones who sleep alone several nights a week, who eat dinner alone and go to parties and weddings and school functions and baseball games and Lord knows what else alone - so that they can do what they do.  But we are not important enough to share in their biggest celebration ever - yet people with no legitimate association with the firehouse were.  I am hurt.  I want to cry.  I want someone to share in being pissed off with me.  But, I can't tell the other wives.  There's nothing to be gained in getting 28 other women pissed off too.  Sometimes men can be just so fucking stupid.
Posted by Kate B at 12:55 PM

I still visit. :) Glad to see a post from you in my blog reader. I think your vent was justified, particularly on a milestone occasion like this. You should definitely have been included before any non-firefighting buddies. Men, indeed! (((hugs))) 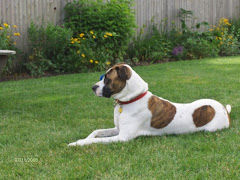